Protect the flock! From JP and Hachette! 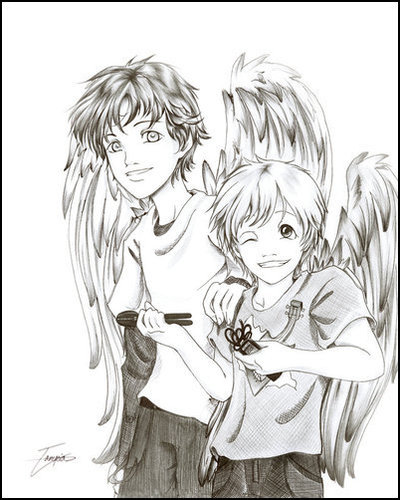 About Me
Honestly? I'm not very interesting.

Music
Anything that doesn't originate in a scary Disney-like corporation.

Books
Putting me in a bookshop is like leaving drugs out for an addict. My favourite authors are Scott Westerfeld and Phillip Pullman. His Dark Materials is my favourite book series.

I decided to post this on here as well as MDW. I was talking about the upcoming MaxRide film with Tally, and had an idea for an all-adult casting. Maximum Ride, the musical comedy spectacular:

Max - Paris Hilton. Without even trying she would bring so much hilarity to the film.

Fang - Noel Fielding, of Mighty Boosh fame. He is…

Random Girl A.K.A. Nobody said…
Alice I read the book! D: Why didn't you warn me?

Random Girl A.K.A. Nobody said…
You should see what I posted on the What Are You Doing? thread.

Random Girl A.K.A. Nobody said…
*sniflfes*

Random Girl A.K.A. Nobody said…
*vanishes*

I was talking in a British accent the other day and thought of you. Then, I bragged to all my friends about how I have a friend in England. They thought it was awesome and so do I.

Hannah said…
Yeah... Imma PM you about that.

Nothing really is happening here... Do you guys have spring break in England? (Sorry, stupid question...)

Hannah said…
Well, I don't get to get off for summer break until I finish my curriculum... I took way too many sick days...

You need to be a member of Maximum Ride Unofficial Community to add comments!